When we desire to ‘Know thy Self’, we first must understand our ‘Factory Settings’, what makes us ‘tick’, what are the ‘programs running on our ‘Hard Drive’ in other words.

Biorhythms is where I like to start, so as you gain an understanding that some days are way better than other to take on certain tasks.

Let me introduce you to Biorhythms

A brief history on the discovery of Biorhythms – In the nineteenth century, studies first began on certain life rhythms or cycles that were later termed “biorhythms”. The word biorhythm is a compound of two Greek words, bios and rhythmos, which mean life and a constant or periodic beat. The theory of biorhythms defines and measures three basic and important life cycles in man: the physical, emotional, and intellectual.

Wilhelm Fliess, a highly respected and prominent doctor in Berlin, did pioneer work on biorhythms in the 1890s. Fliess, who had observed 23- and 28-day rhythms in many of his patients, began to collect statistics on the periodic occurrence of fevers, childhood disease, and the susceptibility to disease and death. With these statistics in hand, Fliess believed he had detected rhythms which were fundamental to man’s life.

A widely read man, Fliess speculated on why these two rhythms should prevail. He believed, much as we do today, that man is essentially bisexual in nature, composed of both male and female elements. Fliess called the 23-day physical cycle the male cycle, since it influenced strength, endurance, and vitality. He considered the 28-day cycle to be representative of the female element in all human beings; it governed sensitivity, intuition, love, and creativity-the entire emotional spectrum.

Subsequent research has reinforced the idea of the 23-day physical and 28-day emotional cycles. Of course, today few would agree with the premise that all physical components are male and all emotional matters female. Instead, both are now considered to be essential characteristics of each sex. 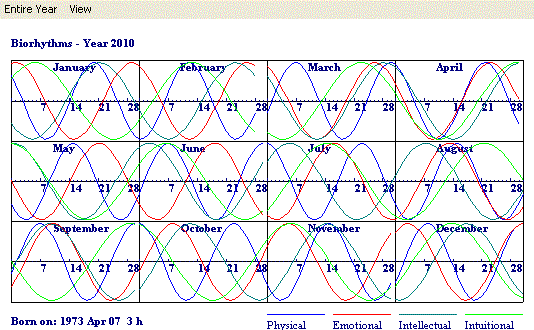